I've tried learning through Youtube video tutorials but that did not help me making good progress. I believe that's because the violin is such a complicated instrument and it requires quite a lot of coordination to get things right. There's the posture, the hold of the instrument between your chin and shoulder, the correct placement of the thumb behind the neck of the violin and the fingers have to be a certain way to gently drop on the strings and then there's the bow movement. That's an awful lot of things to get right when compared to a piano for example, where it's mostly about the fingers and wrist.

I am not saying the piano is child's play but you cannot get the note wrong on the piano but with the violin, depending on where you place you finger, it could be a sharp, a major or a flat of the same note. There's no black/white keys and your finger placement and bow motion has to be precise. 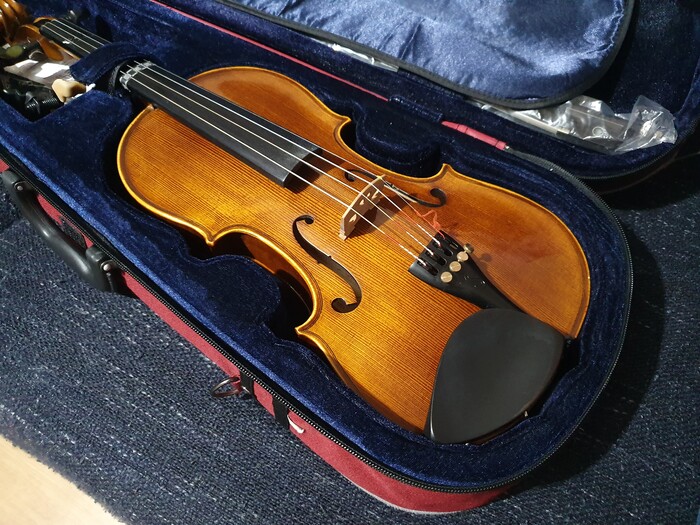 Why did I decide to seek the help of a teacher

The sound of the violin resonates with my soul and I really, like really really really, want to be able to play this instrument. My fails attempts at learning from youtube videos made me realise something, that I wasn't able to progress because I did not understand the basics. It's that simple. You have to get fundamentals right. If you've watched The Karate Kid movie (you have to watch this if you haven't, it teaches you about hard work and patience), you would know that when Mr Miyagi (mentor) took Daniel (student) under his wing, he asked him to do wax on/wax off for quite some time that Daniel got so frustrated he was not learning any cool karate moves. However that movement was fundamental to the training he would later on receive.

Bruce Lee has a famous quote which goes like this "I fear not the man who practiced 10,000 kicks once but the one who has practiced one kick 10,000 times". It's all about getting the basics right first.

What was I looking for in a mentor

I honestly wanted someone like Mr Miyagi; how cool would that be if he was good at both the violin and karate!! A lot of teachers are very much focused on a curriculum. I had a trial lesson with a tutor before and she was so much into the acamedic side of it. Her approach was more geared towards students who are going for exams.

I want to play for myself. I'm not looking to become a professional violinist, not do I have the intention to take any exams, not yet anyway. I don't care so much about the theory, I prefer to feel the music within me. I may not hit the right notes but if it sounds pleasant to me, that's all I care about. Besides the theory side of it, I know I can learn this by myself.

Searching online, I found quite a lot of violin teachers but only one stood out. I was looking for a mature person who had many years experience, was able to teach adults and whose approach was more towards musicianship than to just being able to play the violin. I thought it would be hard for younger people with not that much experience to teach because teaching is a skill in itself. They may be talented on the instrument but may not be so great to pass on the knowledge to others.

Rose was the one I chose because she ticked all the checkboxes of my requirements. Her profile mentioned she varied her teaching according to the needs of the student and she wants to give them an appreciation for music and not just the ability to play. I was sold on that. However when I contacted her, she told me she was all booked and I was so disappointed. I had a second choice but that involved quite a bit of travelling for me (at least 45 mins one way by car) and although I thought a few times about settling for that one, I never really got round to doing it.

Okay, now about my first lesson... 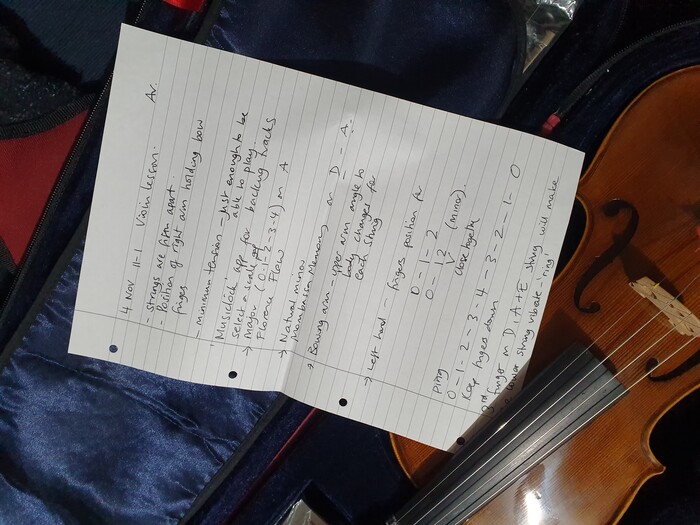 About 7 months later, I got a text message from Rose telling me she had a free space and wanted to know whether I was interested. You can guess my happiness at this point. I quickly call her up but that space did not fit in with my schedule. I can only do after work and during weekends. She offered to give me adhoc lessons which would work on the basis of mutual agreement whenever we both were free. I jumped on that opportunity.

She proposed for the first lesson to be 2hrs, I suppose that's because she needed to understand my motives better, assess my current ability and tailor the lesson for my needs. I was excited when I got to her place, just like a little kid going to Disney World.

I told her I've tried many different musical instruments but none of them strikes me through the heart like the violin does. I also mentioned I wanted to focus more on the basics, the practical than the theory as I was confident I would be able to learn the latter by myself. For me this was a hobby which she understood because to be classically trained to play in a concert requires a totally different approach and dedication.

We played together (not that I was in sync) and I played solo and also with a backing track. It was all fun but honestly after 1hr15 I was getting tired. Her overall assessment of me was great. So I'll talk about that next.

I was convinced I was not holding the violin properly that I started looking into karnatic music where violin players hold the instrument in between their chest and feet. Problem was the only karnatic violin teacher I found was miles away and he never replied back to me, how arrogant. However Rose told me my hold was good, there was just a minor thing to take into consideration, for the neck of the violin to be parallel to the floor.

She re-assured me it was fine as I kept asking her to check my posture. So there you go, it's little things like this I needed to hear. In my mind, I had already planted the seed of doubt, hence I was checking for alternative ways of holding it.

So as not to squeeze the neck of the violin while playing, you have to hold it gently with your thumb. I was aware of this but she said it will come with practice. If you squeeze, then you won't be able to shift into higher positions.

With the dropping of my fingers onto the strings, she said my wrist was angled too far from the neck. I needed to remember to come closer to place the 1st, 2nd, 3rd and 4th finger quicker.

There's an issue with my pinky as it wants to stay straight thus causing tension, than to be slightly curved. This is something a lot of students have problem with. During the bow movement, the fingers have to curl to go with the flow, so having a straight tensed pinky inhibits the smoothness.

When I get closer to the frog, I lose grip on the bow which makes the sound scratchy. Blame the pinky!

Rose told me I'm not a complete beginner as I know quite a few things already. Sometimes I produce a very nice sound. I just need to practice the basics a lot more as I tend to want to rush. It's about remembering to correct all the little niggles, light thumb, left hand wrist closer to neck, being able to bow within a time measure (1-2-3-4, 1-2-3-4) as I go either too fast or too slow.

Do I think it was worth paying for the lesson?

Yes, without a doubt. You need someone who knows their stuff to give you guidance. Perfect practice makes perfect, not just any kind of practice. I now feel more confident and happy.

I also got her to play something for me on my own violin just to make sure it was able to able to produce nice sounds. It's amazing what you can do just in the first position with vibrato.

Hope this encourages people to seek the help of a teacher if they are struggling.

gices Published 04 Nov 2019
1
Gices Abraham is the founder of Clever Dodo. He's a life coach and advocates the practice of MAM (Movement/Arts/Meditation) for a well-balanced and happy life. Born in Mauritius and now living in the UK, he usually blogs about fitness, music, spirituality and driving topics to pass on his knowledge.

This post is tempting me to go buy a violin....

The violin is a hard instrument to learn, are you ready to put in the hard work though?

On another note, how much does it cost over there?

You wouldn't know what make the violin is, would you?

I wonder with the studies and work how you still find time to come on Clever Dodo :P

I don't spend much time here and I write very little.

I see. Well it's always good to see you here. Hope your recovery is going well.

same. I like reading your posts. I learn so much. I'm not recovering well these past few days. If it gets much worse, i'll need to go back to the hospital

5 replies
223 views
Why do we speak ill of others and cannot contain ourselves when we don't have anything nice to say?