My First Time Giving Blood To Save A Life

I must admit I've been scared to donate blood before, not because I was worried it might be a risk to my health but because I thought I'd probably faint after the blood is taken away from me. I'm a thin guy and it's been stuck in my mind that if I lose a significant amount of blood in any way, that would cause me to faint. Anyway as part of my 5 challenges for good causes, I thought it was time to face my fear and save a life along the way. 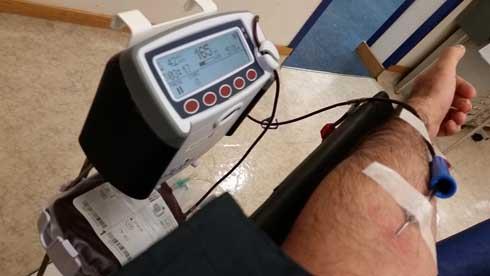 I registered myself as a donor on blood.co.uk website and made an appointment at Luton Donor Centre on 15 November 2014 at 13:35. The trip is only 20 minutes from where I live so I left home at 13:00 and thought I'd park at The Mall (Luton) car park and will have enough time to walk down to the centre. However things did not go as planned as the M1 junction for Luton was closed and diversion was in place. 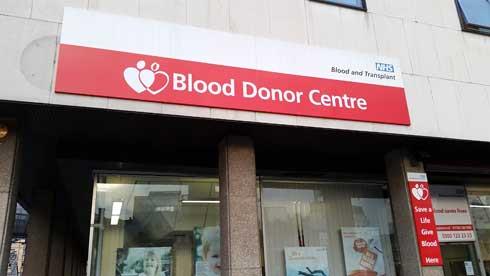 Standstill in traffic, I got shocked by a woman who knocked on my car's window. She asked me whether I was going to Luton Airport and whether she could follow me as she needed to go pick up her husband. I wasn't really going there but I felt she was in distress and she didn't have a sat nav and I should help her. So I told her to follow me and I changed the direction on my TomTom to the airport. Now I must admit I'm really bad at directions myself but with the sat nav trying to make me go back to the closed route and having taken the responsibility of leading that stranger to her destination, I was under quite a lot of pressure to follow the diversion signs correctly.

I called the donor centre and informed them about the road closure on the M1 and they said they were aware of it and it wasn't a problem if I was late. With that sorted, I felt much better. However 15 minutes into the journey, the woman who was following me so far decided to overtake me as she's seen an opportunity to get ahead a few cars. Honestly, I was really upset she did something like this as I was going out of my way to help her but nevermind...

The receptionist gave me a form to fill out which was essentially to know whether I had any disease and whether my blood would be safe to use. I was then asked to drink something (dilluted orange juice they had) before being seen by the nurse. 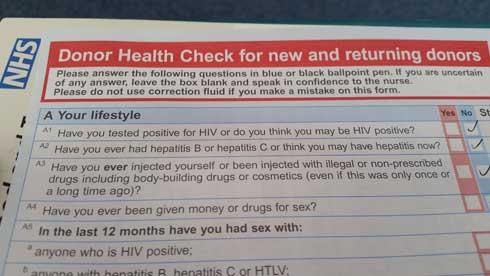 The nurse went through the form I filled in and asked me a couple of questions about my health. Since I've been to a tropical island (Mauritius) within the last 12 months, a senior nurse (sister?) had to come and double check a few things with me. Since there was nothing to worry about, the first nurse then took a blood sample from my middle finger to check the level of zinc. If the drop of my blood sinks in the blue solution they put it in, I was all good to go (which I was).

Extracting The Blood From Your Vein

Coming to what I thought was the scary part, I was called by the first nurse after waiting in the reception. He checked whether the vein above my left elbow was good for the procedure first. Once he was satisfied, he cleaned the area with alcohol for 30 seconds and asked whether I'd like to see the needle he was going to inject and told me if I thought it was too big, we can abandon there and then. I haven't come all this way to give up anyway and although the needle was slightly bigger than what I've had experience with before, it wasn't that big of a needle to give you a heart attack.

He explained a few things to me and informed me my blood was going to be sent to a lab where it will be tested for quite a few things diseases to make sure it was safe to be used by people in need. He collected blood in 3 little tubes first and then the actual blood bag started filling up. It only took 9-10 minutes and I was done.

Obviously I was worried for nothing and I'm glad I've done this. There were a lot to drink and eat afterwards although I took only an egg and mayo sandwich and had some orange juice. I saw other people who were in for placelets which from what I understand is the collection of only the thing they need in your blood and everything else is pumped back into your body but that takes a lot longer to finish (1-1.5hrs). 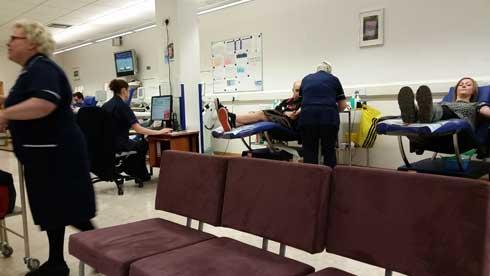 I've read more donors from ethnic minorities are needed and being an Asian myself, I know there are lots of cardiovascular diseases amongst us and therefore more donors should come forward. Nevertheless, people from all background should donate blood if they can as it saves the lives of others and it cleans your blood stream too (so both donor and receiver benefits).

gices Published 15 Nov 2014
Gices Abraham is the founder of Clever Dodo. He's a life coach and advocates the practice of MAM (Movement/Arts/Meditation) for a well-balanced and happy life. Born in Mauritius and now living in the UK, he usually blogs about fitness, music, spirituality and driving topics to pass on his knowledge.
Like what you see?

5 replies
1.1K views
Helping the Homeless by Giving Food, Clothes and Just Being a Good Listener