A few weeks ago, a company email was sent round informing us we'd be participating in the Macmillan Coffee Morning which aims to raise money to provide better care and improve the lives of people affected by cancer. We were asked if any of us or our partners could bake some cakes but that's not something I was able to do. So today, the fundraising event was taking place at Grovesnor Road in St Albans in the building where our company is located and it was going to be between 10-11am. 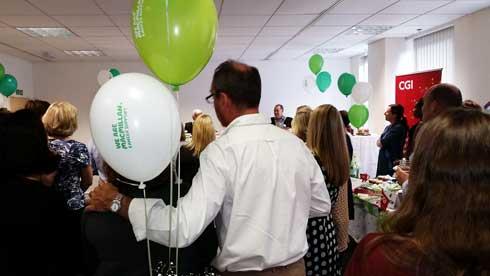 I have a weekly conference call with a client every Thursday from 10am and the call which was supposed to take at most 15 mins, actually lasted 30 mins. During that time, I saw some colleagues returning with cakes from the event. Once the call was over, I was thinking whether I should ask someone to come with me or just go by myself. Luckily though, a colleague asked me whether I'd like to go there and we set out straight away.

There were loads of people at the event although only around 8 companies were participating. Now I'm not a big fan of cakes but my only reason to be there was to donate some money for a good cause. I bought a cupcake from our company's table and two slices of cakes from 2 other representatives. In total I spent £3 and although it was not a huge amount, I felt good about it.

It's so nice that people took the time to bake these cakes at home because let's face it we live in a world where there's not enough time. I wished I could buy something from each participant to show them how much I appreciated their efforts. I had a nice time chatting with some people there and it was also good to be away from the computer!

Although there were 3 prizes, which unfortunately our company did not win, I thought every participant was a winner for their support in making this fundraising event a success. Not sure how much money we raised but whatever the amount was, it's all going to a good cause :)

Another good deed for the day!

And when I finished work and was taking the stairs, I saw an older woman who was struggling with a crate. At first I thought it was her last day at work or something like that but it turned out she was bringing back the things she brought in for the Macmillan event. Since the lifts were not working, I offered to carry the crate. I was going to Floor -1 while she was going to Floor -2 but I assured her I was happy to carry this to her car and she was really happy.

If you've ever participated in the Macmillan Coffee Morning, whether by baking a cake, organising or preparing the event or just attending and buying cakes (thus making a donation), I'd really like to know your experiences.

gices Published 25 Sep 2014
Gices Abraham is the founder of Clever Dodo. He's a life coach and advocates the practice of MAM (Movement/Arts/Meditation) for a well-balanced and happy life. Born in Mauritius and now living in the UK, he usually blogs about fitness, music, spirituality and driving topics to pass on his knowledge.
Like what you see?

4 replies
320 views
Why is it so easy to point out mistakes in others than recognising goodness?

4 replies
10.4K views
Act of Kindness - Rescuing a Helpless Bird from the Street

2 replies
642 views
Helping the Homeless by Giving Food, Clothes and Just Being a Good Listener